Cooler temperatures, occasional rain, and winds up to 25 MPH did not deter the over 80 cyclists and walkers who showed up in force throughout the morning of Saturday, September 24th, World Polio Day.  As American Rotarians unloaded bicycles in the parking lot of the Niagara Falls Aquarium, their Canadian friends gathered by the Rainbow Bridge at the Duty-Free Shop.  Several of the Rotarians from the “Best of Friends,” Rotary District 7090 tried waving to one another with their hand held Canadian, American, and Rotarian flags, flying proudly in the chilled breeze.

Dozens of  miles were cycled and walked by the International group of Rotarians to help raise funds for the first ever Rotary District 7090, Dr. Ron Mergl Memorial – Pedal for Polio event. After cycling from Niagara Falls Aquarium to Academy Park, Rotarians were met by Lewiston, NY Deputy Mayor Victor Eydt.  All enjoyed a healthy snack which was generously provided by the Lewiston-Niagara-on-the-Lake International Rotary Club.  While all participants, guests, and family members of the fundraiser joined together at Academy Park near the Chamber of Commerce Building, they listened to Eydt as he presented a Mayoral Proclamation honoring Rotarian cyclists, walkers, and sponsors.  He noted that 99.9% of Polio cases have decreased since 1998 and the world stands on the threshold of eradicating this debilitating disease.

Leah Bisson who works as a Facilitated Enroller specializing in public health insurance options through the NYS Department of Health and recently celebrated her first full year as a Rotarian stated, “Pedal for Polio was such a fun experience for me not only because we were actually able to meet and participate as a group, but also because of how important the mission of Polio eradication is on a global scale. It is through fundraising efforts like this that we can raise both money and awareness. In the United States Polio may seem like a disease of the past, but it still continues to impact far too many lives. The wild Polio virus is active in two countries at this point, but it is often the final push that is the hardest. I am so grateful to have had the opportunity to participate in an event that ensures we will not end our efforts until Polio is truly a disease of the past.”

All Rotarians and event organizers strictly adhered to COVID-19 safety precautions and requirements. On the Canadian side of the border, cyclists and walkers began their journey at the strangely quiet Rainbow Bridge. When reaching Queenston Heights Park, they were welcomed by Rotary District Governor, Frank Adamson and Queenston Lord Mayor and Rotarian, Betty Disero along with June Mergl.  Mergl is the widow of Dr. Ron Mergl, for whom the Memorial ride was named.

On one side of the mighty Niagara River, in her proclamation, Lord Mayor Disero proclaimed that Saturday, September 24th was World Polio Day in the Town of Niagara-on-the-Lake. Disero congratulated Rotarians worldwide for protecting and inoculaing  more than 2.5 billion children in 122 countries. At Queenston Heights Park, Rotarians were also treated to healthy snacks which were graciously provided by Fonthill and Niagara-on-the-Lake Rotary Clubs. 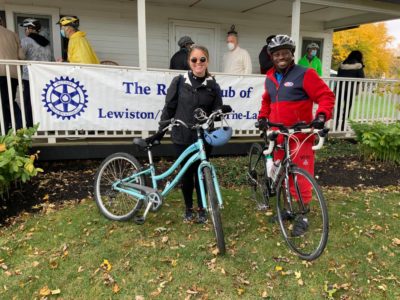 Also on the Canadian side of the ride, Rotarian, cyclist, and business owner/coach & facilitator Angela Carter said, “I couldn’t think of a better way to spend a cold, crisp fall Canadian day than cycling for a cause.  The cycle was exhilarating along the Niagara River, but even more exhilarating was being at the finish line and listening to the inspirational words of  Mergl and Adamson on how impactful this ride was for our efforts to eradicate Polio and for the legacy of Dr. Ron Mergl.  Rotarians make such a difference in the world.”

Executive Director Gregory Stevens and Administrative Assistant Lisa Vitello of the Niagara River Greenway Association partnered with Rotary District 7090 to bring about the success of cycling event and fundraiser. Greenway’s mission is to create a world class trail and greenspace network that communities can be proud of and cherish for generations to come.

Stevens spoke to Rotarian cyclists at Academy Park in Lewiston and enthusiastically addressed the crowd, “Our Rotary fundraiser ride is special in many ways.  Rotary District 7090 clubs are partnered with the Niagara River Greenway to promote volunteer stewardship of waterfront trails and greenspaces by local high schools. This Pedal for Polio ride is the first organized fund raising ride to make use of the brand new shoreline trail development from north Niagara Falls through Whirlpool and Devil’s Hole State Parks, Across the NYPA dam, and down the escarpment to Academy Park in the Village of Lewiston.  We look forward to more safe and fun rides very soon!”

Rotary International has contributed more than $1.8 billion toward eradicating Polio. Rotarians will continue to fight against this debilitating and paralyzing disease until there are no new cases diagnosed, throughout the entire world.

Several Rotary Clubs also sponsored their own rides and challenges throughout the International District. From exercising to cycling around local lakes, a majority of Rotarians participated in the cycling event. With a generous matching donation which will be made by the Bill and Linda Gates Foundation, District 7090 Pedal for Polio has totaled nearly  US $200,000 to date.

For more information on how Rotary Opens Opportunities, makes a difference in your community, or to still donate to the past Pedal for Polio International cycling event, please contact District Governor Frank Adamson at 905-892-0200, or e-mail office@d7090.org, or visit https://rotary7090.org/Stories/pedal-for-polio.  To view images and video clips of this first time Pedal for Polio International event, visit the District’s YouTube channel at, https://www.youtube.com/watch?v=H_MXPQQ-t_c