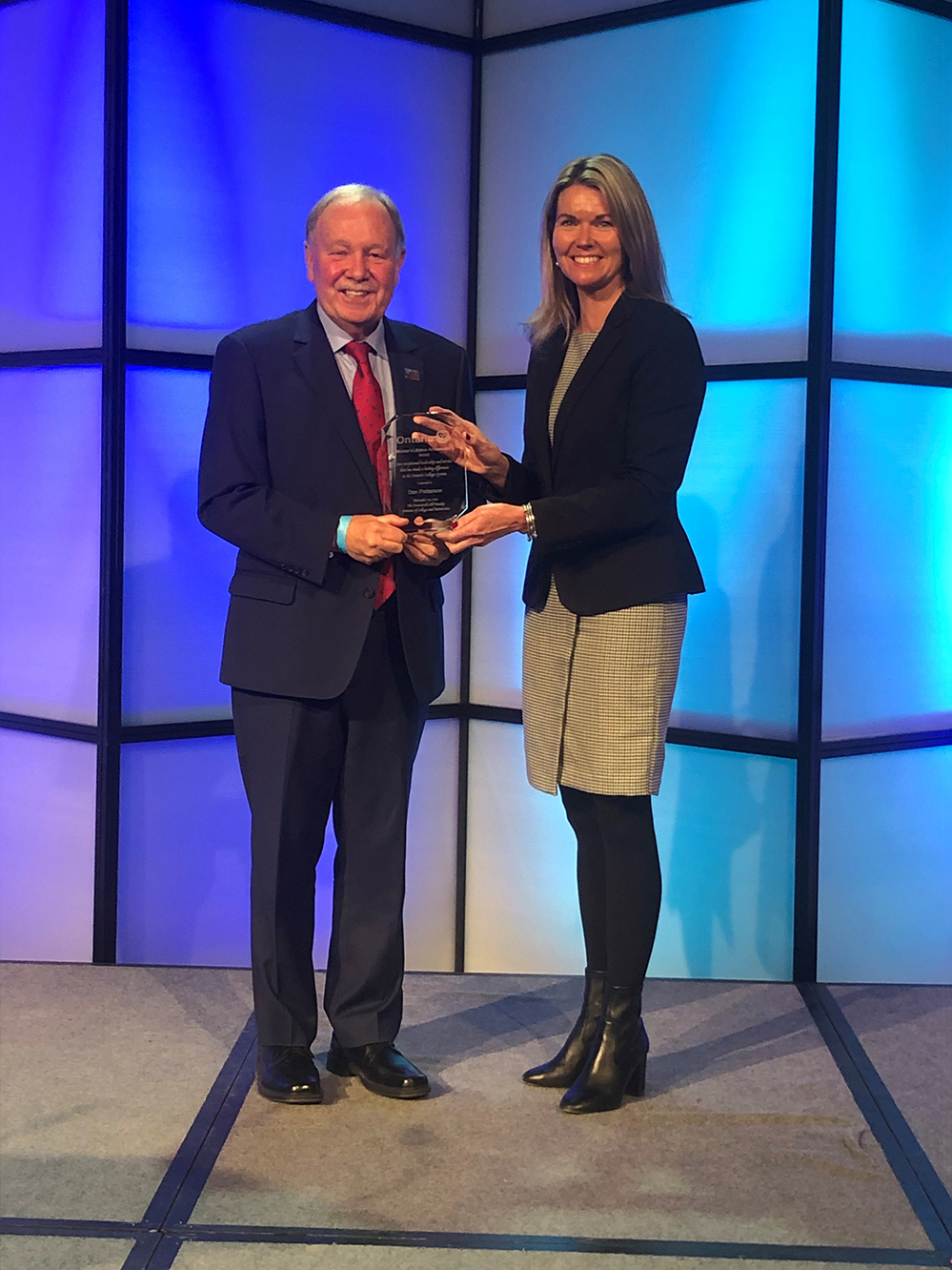 Patterson, who led Niagara College from 1995 to 2020, accepted the prestigious award in front of world-renowned leaders in education, as well as family and friends.

“All of us at Niagara College are very pleased to see Dan recognized for his remarkable contributions to Niagara College and to Ontario’s college system,” said Sean Kennedy, president of Niagara College. “Dan’s legacy is reflected in our campuses, which are among the most unique learning environments in Canada, and his vision of building an innovative college of firsts has earned us a strong reputation as a trailblazer within the College sector.”

The Minister’s Lifetime Achievement Award recognizes the contribution of outstanding leaders in the Ontario College sector who make an enduring difference in the lives of students, to the communities they serve, and to the economic development of our province. The recipient is selected by the annual Colleges Ontario Leadership Awards selection committee, composed of representatives from the government, colleges and students.

Patterson, who led Niagara College for 25 years before concluding his tenure as president in 2020, was one of four award recipients who received a Minister’s Lifetime Achievement Award at the Summit. Among them, Ann Buller from Centennial College, Judith Morris from Lambton College, and Fred Gibbons from Northern College.

“What a wonderful honour,” said Patterson in his acceptance speech. “Thank you, Minister and everyone who was involved in my nomination. I would not be standing here today and receiving this Lifetime Achievement Award if it wasn’t for my late wife Saundra who walked with me every step of my twenty-five-year-journey as College President.”

Patterson’s partner Saundra, a dedicated ambassador for Niagara College and a champion for its students, passed away in January, 2021. Patterson also thanked his family and daughter Christine who joined him at the awards presentation in celebration of this milestone achievement, as well as friends and Niagara College colleagues in the audience.

During his tenure, Patterson was a catalyst for innovation and growth. He oversaw significant expansion, including the construction of the Niagara-on-the-Lake Campus, the creation of innovative learning enterprises, including Canada’s first teaching winery, teaching brewery, and teaching distillery. Under his leadership, the College tripled its enrolment to 13,000-plus full-time students in over 130 programs with an operating budget surpassing $225 million. Patterson also led the largest capital expansions in Niagara College history with over $300 million of campus redevelopment, including a significant renewal of the Welland Campus in 2011.

He helped introduce trailblazing programs, including Canada’s first post-secondary credential in Commercial Cannabis Production and Commercial Beekeeping, responding to the needs of emerging industries, and advocated for experiential learning opportunities for students preparing for the world of work. Patterson was committed to student success, and his philosophy was to build connections between the classroom and the community, and to showcase the valuable role that colleges could play as leaders in economic development.

Jill Dunlop, Ontario’s Minister of Colleges and Universities, presented the award and thanked the four retired college presidents for their sage leadership over the course of their tenures and during unprecedented times.

“As a tribute to the college sectors’ nimbleness and tremendous capacity to respond quickly to this unprecedented challenge, we are honouring four retired presidents this year, whose leadership ensured colleges were well-positioned to succeed in these difficult circumstances and will continue to prosper in the years to come,” said Dunlop.

“It truly is a privilege and good fortune to work in the post-secondary education ecosystem,” said Patterson. “We in education are given the opportunity to make a difference, to enrich the lives and fulfil the dreams of our students, to open up promise and possibility, to tear down barriers, to link students to the world of work, build pathways to success, to improve the socioeconomic conditions to reduce poverty and open up job opportunities. It’s a noble calling – daunting but rewarding – and one that I have been blessed to participate fully in.”

“Dan has been a catalyst in transforming Niagara College from its very humble beginnings into one of Ontario’s leading post-secondary institutions. Through his energy and innovative leadership, Dan has created a place of higher learning that has inspired a generation of students to pursue their applied dreams,” said Del Rollo, vice president, Industry and Government Relations at Arterra Wines Canada and former chair of NC’s Board of Governors in his letter of support.

Patterson continues to contribute to education and innovation in Ontario and beyond. He is currently serving as chair of the Ontario Centre of Innovation and he is a member of the board of trustees of Niagara University in Lewiston, New York. Since concluding his term as president of Niagara College, he has also worked in support of the Dan Patterson Legacy Campaign.

In November of 2019, the Niagara-on-the-Lake Campus was renamed the Daniel J. Patterson Campus in recognition of his outstanding contributions to Niagara College.