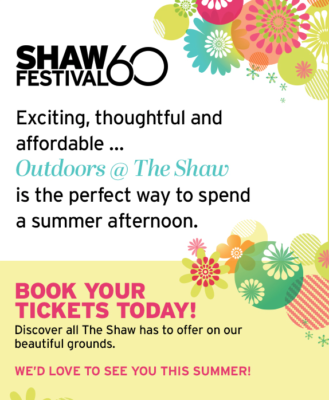 Niagara-on-the-Lake, ON (May 11, 2022) — The Shaw Festival will once again go al fresco with a series of specially produced performances, concert series and curated experiences throughout the summer and fall. Popular Outdoors @ The Shaw events return with new enchanting and imaginative encounters at various locations in and around the Festival grounds and Niagara-on-the-Lake.

Outdoors @ The Shaw is proudly sponsored by BMO Financial Group.

The 2022 version of Outdoors @ The Shaw will feature:

A YEAR WITH FROG AND TOAD – IN CONCERTMusic by Robert Reale, Book and Lyrics by Willie RealeBased on the books by Arnold LobelOriginally presented on Broadway by Bob Boyett, Adrianne Lobel, Michael Gardner,Lawrence Horowitz and Roy FurmanWorld Premiere at the Children’s Theatre Company, Minneapolis, MinnesotaDirected by Jonathan TanMusic direction by Ryan deSouzaIntern music direction by Paul RodermondDesigned by Judith BowdenJune 12 to July 24, various performance timesThe BMO Stage, 10 Queen’s Parade on The CommonsFrog (Drew Plummer) and Toad (Mike Nadajewski) couldn’t be more different from oneanother, yet they are the best of friends. Based on the beloved children’s series by ArnoldLobel and complemented by a Tony Award-nominated score and book, the critically acclaimedmusical A Year with Frog and Toad celebrates the enduring bonds of friendship … warts andall. This charming family-friendly one-hour concert also features the talents of Alexis Gordon,Graeme Kitagawa*, James Daly and Jenny L. Wright.Stage management team: Diane Konkin, stage manager; Meghan Froebelius, assistant stagemanager; and Kathryn Urbanek, apprentice stage manager.$35 / $30 under 30 / $10 youthThe BMO Stage is sponsored by BMO Financial Group.

A morning concert filled with the inspirational sounds of gospel music presented by ShawFestival company and community members.$35 / $30 under 30 / $10 youth

A SHORT HISTORY OF NIAGARACreated by Alexandra Montagnese and Mike PetersenOriginal sound design by Ryan CowlCommissioned and presented by the Shaw Festival, in partnership with Parks CanadaJuly 21 to August 4, Fort George, 51 Queen’s ParadeAugust 5 to 14, Market Room, Court House, 26 Queen Street, 11 a.m. and 1 p.m.Back by popular demand, A Short History of Niagara is a perfect combination of storytellingand the artistry of wordless puppetry. From the Maid of the Mist to Laura Secord to the foundingof the Shaw Festival, the history of the Niagara Region is brought to life through captivatinghistorical vignettes. It’s thirty minutes of delight for young and old alike.$10 / $5 youthA Short History of Niagara is sponsored by James and Diane King and the Humeniuk Foundation.

Designed by Judith BowdenThe BMO Stage, 10 Queen’s Parade on The CommonsAugust 17 to October 2, various performance timesA one-hour musical tribute to the year the world said “yes” and embraced a cultural and artisticexplosion. It was a time of flappers, jazz, the music of Louis Armstrong and George Gershwin;and the writings of James Joyce and T.S. Eliot. T’Ain’t Nobody’s Biz-ness if I Do by PorterGrainger and Everett Robbins and Fanny Brice’s My Man reigned the radio waves, whileNosferatu: A Symphony of Horror and Rudolph Valentino’s Blood and Sand ruled the silverscreen. Over in the art world, Picasso and the Group of Seven exploded onto the scene.1922 – In Concert features the talents of Kristopher Bowman, Shane Carty, Kristi Frank,J.J. Gerber, Élodie Gillett, Deborah Hay, Allison McCaughey, Kevin McLachlan*, MikeNadajewski and Olivia Sinclair-Brisbane*.Stage management team: Diane Konkin, stage manager; Melania Radelicki, assistant stagemanager; and Jordine De Guzman, apprentice stage manager.$35 / $30 under 30 / $10 youthThe BMO Stage is sponsored by BMO Financial Group.

*RBC Emerging Artists are sponsored by the RBC Foundation and RBC Emerging Artists.**Christopher Newton Interns are generously supported by Marilyn and Charles Baillie.The Shaw Festival’s 2022 season runs through to December 23, with a playbill featuring DamnYankees, The Importance of Being Earnest, The Doctor’s Dilemma, Cyrano de Bergerac,Gaslight, Chitra, Just to Get Married, This is How We Got Here, Too True To Be Good,Everybody, August Wilson’s Gem of the Ocean, Fairground, Shawground, A Short Historyof Niagara, A Christmas Carol and Irving Berlin’s White Christmas.

Despite the easing of COVID-19 measures, The Shaw continues to require the use of masks inall indoor theatres and spaces. Masking is not required outdoors on Shaw Festival grounds or atoutdoor performances. This decision is done out of an abundance of caution for both companymembers and patrons. The Shaw’s Duty of Care remains in place. While these measuresinclude a commitment to ensuring the health and safety of audiences, company members andcommunities, there remains an inherent risk of exposure to COVID-19 in any public place wherepeople congregate. The Festival continues to work closely with public health experts to ensureall necessary and reasonable precautions are being met to reduce the chances of exposure;however, patrons are encouraged to take what precautions they deem necessary to protectthemselves and others. Patrons are also requested to refrain from attending any performance orevent if they are presenting COVID-19 symptoms.-30-The Shaw Festival wishes to acknowledge and honour the land upon which its patrons andcompany members gather as the historic and traditional territory of First Nations peoples.Recognition and thanks are extended to the Neutral Nation, the Mississauga and theDRAFTHaudenosaunee for their stewardship of these lands over millennia.

About the Shaw FestivalInspired by the spirit of Bernard Shaw, the Shaw Festival creates unforgettable theatricalencounters. The Shaw is a place where people who are curious about the world gather to sharethe unique experience of live theatre and to create a deeper human connection with the artists, thebeauty and abundance of Niagara and with each other.