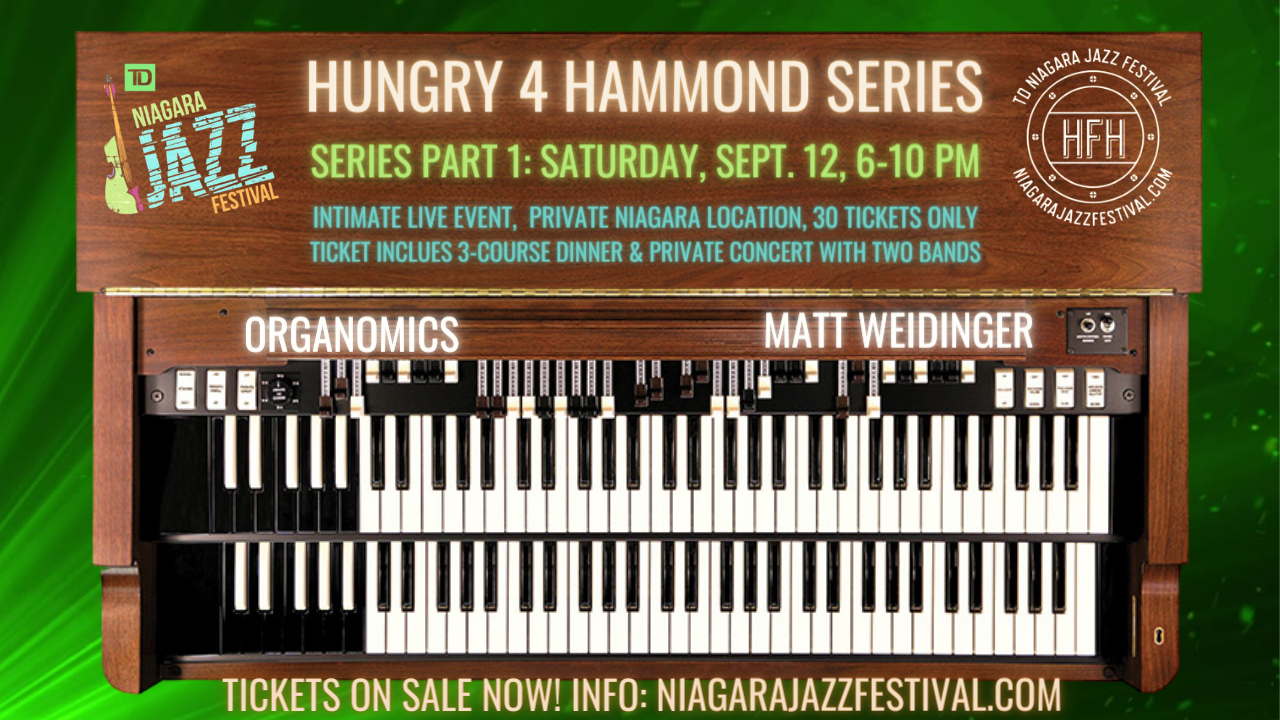 This is a live, in person event taking place at a private Niagara location (location revealed upon ticket purchase). Some portions of this event will also be streamed live from our Facebook and YouTube channels (beginning at 6pm EDT).

COVID-19 related safety procedures including screening and distancing will be in effect.

This series is presented LIVE on two dates: Saturday, September 12 and Saturday, October 03. Visit our website for information about our featured artists, and about Part 2 with JV’s Boogaloo Squad and The Joint Chiefs of Soul featuring Lance Anderson with Shamaka Khalid Ali.

Check our website for details about our “Hungry for Hammond at Home” take-out dining menu in partnership with The Grantham House in St. Catharines and The Forty Public House in Grimsby. 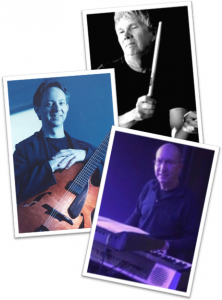 Led by Niagara based jazz musician and educator Randy Stirtzinger, and formed in 2015 the ORGANOMICS mandate is a simple one: to use the classic 1960’s Soul Jazz sound of organ, guitar and drums to explore the vast literature of the subsequent decades while maintaining the traditions of the original era.

Randy Stirzinger has been and still is to this day, a pillar of jazz music in the Niagara community. He has performed all over the region and beyond as a pianist, bass player and vibraphone player. He first discovered his passion for jazz when he heard Oscar Peterson’s ‘Hello Herbie’ album, Herbie Hancock’s ‘Maiden Voyage’ album and HH’s ‘Headhunters album’ around the of age 16. Since then he has never looked back. His first instrument is the bass guitar and later on came piano, vibes, latin percussion and then upright string bass. Some of his influences include: Milt Jackson, Cal Tjader, Tito, Mongo, Ray Brown, Don Patterson, to name just a few.

Graham Lear is a legendary drummer who has played with the likes of Santana, Gino Vanelli, Paul Anka, and REO Speedwagon just to name a few. An opportunity to hear his insight on ‘Drums and Bass’ is not to be missed.

Catching the tail end of the 1960s provided Nova Scotia guitarist Roy Patterson a broad palette of musical styles to draw from. He performed with local groups touring Atlantic Canada and in 1978 the 24 year old made the move to Toronto bringing along an intense practice routine and a burning desire to play. Since then Roy has performed with many of Canada’s elite, including Don Thompson, Terry Clarke, Doug Riley, The Bob Mover Quartet, Pat Labarbera and many other highly accomplished artists. His style has drawn comparisons with some of the most respected guitarists in North America, and his playing has taken him to Finland, Istanbul, Italy, Taiwan and the U.S.A. 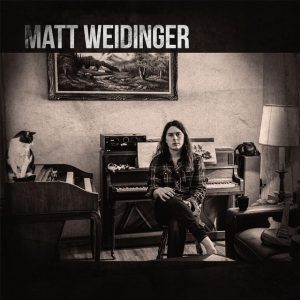 Matt Weidinger has a voice like no other. The 23-year-old Kitchener, ON native is a passionate young songwriter, who is well known for his mature rock/soul vocals and impressive multi-instrumental (keyboards, guitars) talents. Weidinger has spent the last year focusing primarily on his work with the band LumberJunk and his songwriting, which included several sold-out shows and the release of two EPs. His unmistakable earthly tones captivate the hearts of anyone who hears it. He performs like a veteran musician on the piano and organ, and is equally proficient on guitar, bass or mandolin.

Although some consider him a throw back of the ’60s, he still has the capacity to grab the attention of both the old, young and everyone in between. He’s an “old soul” who easily commands the attention of any crowd.  His passion for music and performing is contagious.

Starting his music career at the ripe age of 15, Weidinger has had the pleasure of playing a variety of venues around Southwestern Ontario on a weekly basis. He also performs at multiple blues festivals around the province.

A huge thanks to our sponsors for their generous support!