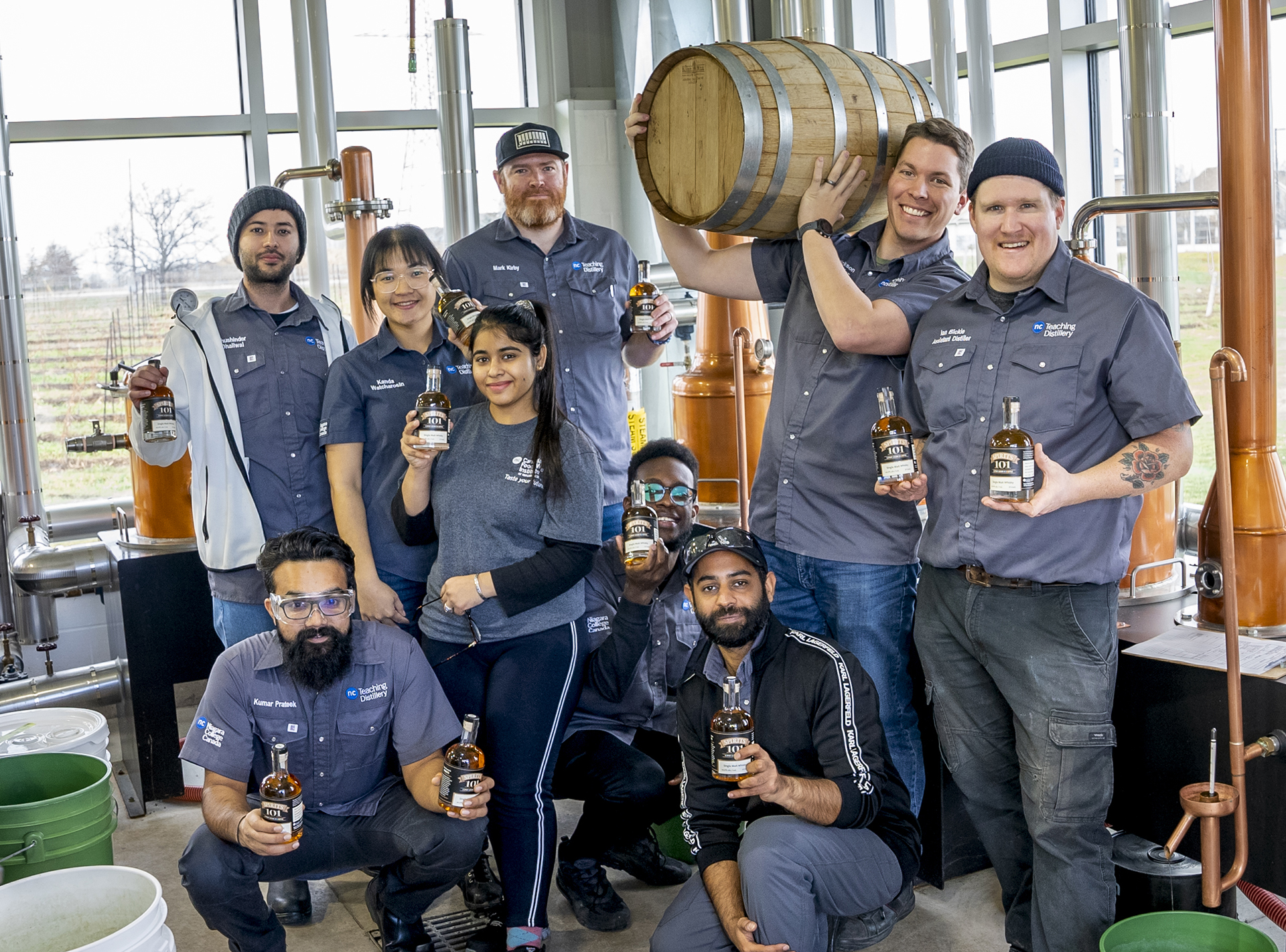 Good things come to those who wait at the NC Teaching Distillery, which has recently released its first whisky.

“Following the success of our School Spirits products over the past three years, we are very excited to release the highly anticipated first whisky from Canada’s first Teaching Distillery,” said Steve Gill, General Manager of NC’s Learning Enterprises. “Each spirit from our Teaching Distillery gives the public a taste of what Canada’s future leaders in the growing craft distilling industry are producing.”

Head Distiller David Dickson noted that the NC whisky has not only been long awaited, it marks a significant milestone for students, staff and faculty.

“We are always being asked when we would have our first whisky release and it has been a major goal of ours,” he said. “We try our best to produce a diversity of products to give a diversity of student experiences, but whisky is one of those cornerstones.”

Whisky production takes a long time, said Dickson, which allows students to see the transformative process of the spirit in the barrel over time.

“To have this get to the shelf, we have to build on student knowledge, go through many production processes – creating labels, government approval and testing, acquiring casks and aging the spirit for a long time – the waiting feels like the hardest part.”

While Scotch may only be made in Scotland, Dickson said the Teaching Distillery’s Single Malt Whisky attempts to mirror that production.

Single Malt Whisky differs from most Canadian whiskies which use corn and rye and are distilled in columns, noted Dickson. A traditional ‘brewing style’ of enzyme breakdown was used, without external enzymes. The addition of smoked malt gives a different character to the final product.

“It is most similar to the classic, historic production of Whisky across the Atlantic,” said Dickson.

While Single Malt Whisky is the NC Teaching Distillery’s first whisky release, it is just the beginning. Every class has and will create whisky, noted Dickson, and a future Canadian Rye Whisky-style release is on the horizon as well.

Students are currently distilling the next batch of whiskies at the Teaching Distillery, Dickson said.

“The students have been mashing and distilling the base spirit, but their whiskies won’t be released until three years after the production, due to whisky aging requirements,” he said.

Alumnus Lokesh Khismatrao, who is currently Head Distiller at Tumbleweed Spirits distillery in Osoyoos, B.C., worked on the whisky as an Artisan Distilling student (2020).

“I feel it’s my honour to be part of the first ever NC whisky creation,” he said.“When we got a project to create the first whisky for NC, with the guidance of David [Dickson], every single student was not only excited but was very focused.

“This whisky is a great example of how NC is moving successfully towards enriching the alcohol industry.”

Alongside Single Malt Whisky, the Teaching Distillery has also introduced Spirits 101 Spiced Rum and Christmas Gin in time for the holiday season.

The Niagara College Teaching Distillery is a 2,500-square-foot facility located at Niagara College’s Daniel J. Patterson Campus in Niagara-on-the-Lake, which is home to NC’s Artisan Distilling program. Students produce a variety of distilled products including vodka, gin, brandy, rum, whisky and other spirits. The program and the Teaching Distillery launched in September 2018 as the first of its kind in Canada, following the footsteps of NC’s trailblazing Teaching Wineryand Teaching Brewery. Visit NC’s School of Wine, Beer and Spirits for program information.