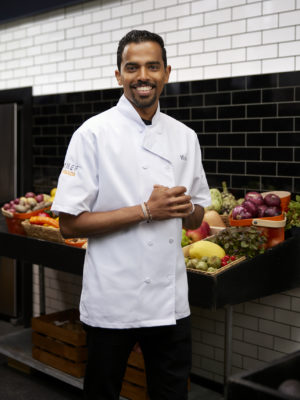 Top Chef Canada is ready to turn up the heat for its upcoming 10th season, and a Niagara College alumnus is fired up to compete in this popular reality television series considered one of the most prestigious culinary competitions in Canada.

Vaishnav (‘Vish’) Mayekar, who graduated from NC’s Culinary Management (Co-op) program in 2014, has been selected to compete in the upcoming season of the esteemed culinary competition to debut on Food Network Canada in September, dubbed Top Chef Canada X.  He is on the roster of 11 talented chefs from across the country who will be vying for the coveted title of Canada’s Top Chef.

“Top Chef Canada’s goal is to shine a light on the country’s best and brightest culinary stars, with this season’s cast of chefs truly representing the culturally rich fabric of Canada’s food scene,” said Eric Abboud, executive producer and showrunner, Insight Productions. “Vish is one of best chefs in Vancouver and we are thrilled to cast him on the series as he is wildly competitive and passionate about sharing his food story.”

For each season of Top Chef Canada, Insight Productions and Food Network Canada search for a group of passionate professional chefs to showcase a variety of cuisines and share their love of food with the network’s audience. Interested chefs from across the country apply through the Top Chef Canada casting site. Selected applicants go through a more formal audition and casting process, and the chefs who make it to the show are chosen by Insight Production’s casting team and representatives from Food Network Canada.

Mayekar has been following the show since its first season and, with his longtime passion for competition, he knew that he wanted to be a part of it.

“It’s an absolute honour. You know it’s not something everyone gets to do or is able to do so being selected to compete in one of the most prestigious competitions in Canada feels amazing,” said Mayekar. “I’m stoked and, personally, I’ve wanted to do this for a few years now, but it’s come at the right time, and I can’t wait for everyone to watch me compete.”

As a professional chef, Mayekar is known for his unique ingredient combinations and love for infusing flavours and spices from his Indian heritage. Trained and well-versed in Italian cuisine, he is currently head chef at Pepino’s Spaghetti House and wine bar Caffe La Tana in Vancouver, B.C. He also cooks for some of Hollywood’s biggest stars every year at the Cannes Film Festival, where he is the Head Chef at the American Pavilion.

A member of Culinary Team Canada, Mayekar is also preparing to represent Canada on the world stage in 2024 at the IKA Culinary Olympics.

He has a lot on his plate, balancing his career with Team Canada and Top Chef competitions, but Mayekar believes “where there’s a will, there’s a way.”

“I just like staying busy, always being involved in things and always trying to be a better cook and a better person each day,” he said.

Mayekar grew up in Mumbai, India and fell in love with food at an early age. His passion for the culinary arts led him to enrol at NC where he made his mark not only at culinary events and competitions, but on the board of directors for the NC Student Administrative Council and as a volunteer with the international department and won the prestigious Ontario Youth Award in 2014.

“Niagara College has truly been the foundation of a lot of my accomplishments in Canada,” said Mayekar. “I met the most amazing chefs and mentors at Niagara College, and some lifelong friends that I share my culinary journey with.”

News about Mayekar’s selection as a chef contestant Top Chef Canada X is stirring up excitement throughout the College and its School of Culinary Arts.

“The ultimate satisfaction that an educator can have, is hearing about the success of their graduates. At Niagara College, we strive to set our alumni on the right path with a relevant set of tools but, ultimately, it’s their own hard work and determination that breeds success,” said Craig Youdale, dean, Culinary, Tourism and Beverage Studies.

“Our entire team is very proud of Vish, and we will look forward to cheering him on both on the set of Top Chef Canada, as well as his life’s journey.”

The announcement of Mayekar’s selection for Season 10, comes just months after NC alumna Erica Karbelnik (nee Hakien) was declared the winner of Season 9 of Top Chef Canada, while her husband Josh Karbelnik also cooked his way to the top four. The Karbelniks both graduated from NC’s Culinary Management Co-op program in 2011 and were the first married couple to compete on the show.

Top Chef Canada X will air on September 26 at 10 p.m. ET/PT on Food Network Canada and will be available to stream through STACKTV. In addition to the title of Canada’s Top Chef, the winner will earn the largest reward in Top Chef Canada history: a cash prize of $100,000 provided by Royale Tiger Towel, a luxury Lexus NX, brand-new kitchen outfitted by KitchenAid, an exclusive farm-to-table adventure courtesy of Glad, and a $10,000 cash prize from DoorDash. For information about Top Chef Canada visit foodnetwork.ca.

Photos:  Vish Mayekar will be a chef contestant on Season 10 of Top Chef Canada. The Niagara College Culinary Management alumnus (2014) is a member of Culinary Team Canada, and head chef at Pepino’s Spaghetti House and wine bar Caffe La Tana in Vancouver.