Niagara College and Commercial Cannabis Production program alumna Stacie Hollingworth were recognized for their excellence and innovation in the cannabis industry.

Niagara College found itself in the spotlight, September 12, with two great reasons to celebrate at the 2022 Grow Up Industry Awards in Niagara Falls.

“It’s exciting to be recognized as a top educator in an emerging industry,” Unwin said. “To know that our Commercial Cannabis Production program is being celebrated for its excellence in providing students with the expertise they need to thrive in the cannabis industry is very rewarding. We are proud of Stacie for this incredible achievement.”

Hollingworth was one of only three females nominated in her category, which recognizes the professional grower whose dedication to their craft consistently produces top quality crops for the marketplace and a positive workplace for the sector.

“It truly was an honor to be recognized with this distinction,” said the two-time NC alumna, who also graduated from the Winery and Viticulture Technician program in 2003. “The award was based on voting from individuals within the cannabis industry, so to have been supported in this way by my peers and colleagues is an incredible accomplishment.

“Winning this award as a Niagara College alumna at the same time Niagara College won the award for Best Cannabis Educator really feels like a full circle: the best instructors educating the future best industry leaders.”

Hollingworth currently works as Master Grower for Safari Flower Co. in Fort Erie where she grows product for more than two dozen brands distributed across Canada, Israel and Germany. She leads a grow team of 46 people who cultivate 12 varieties at once in 10 indoor controlled grow rooms. 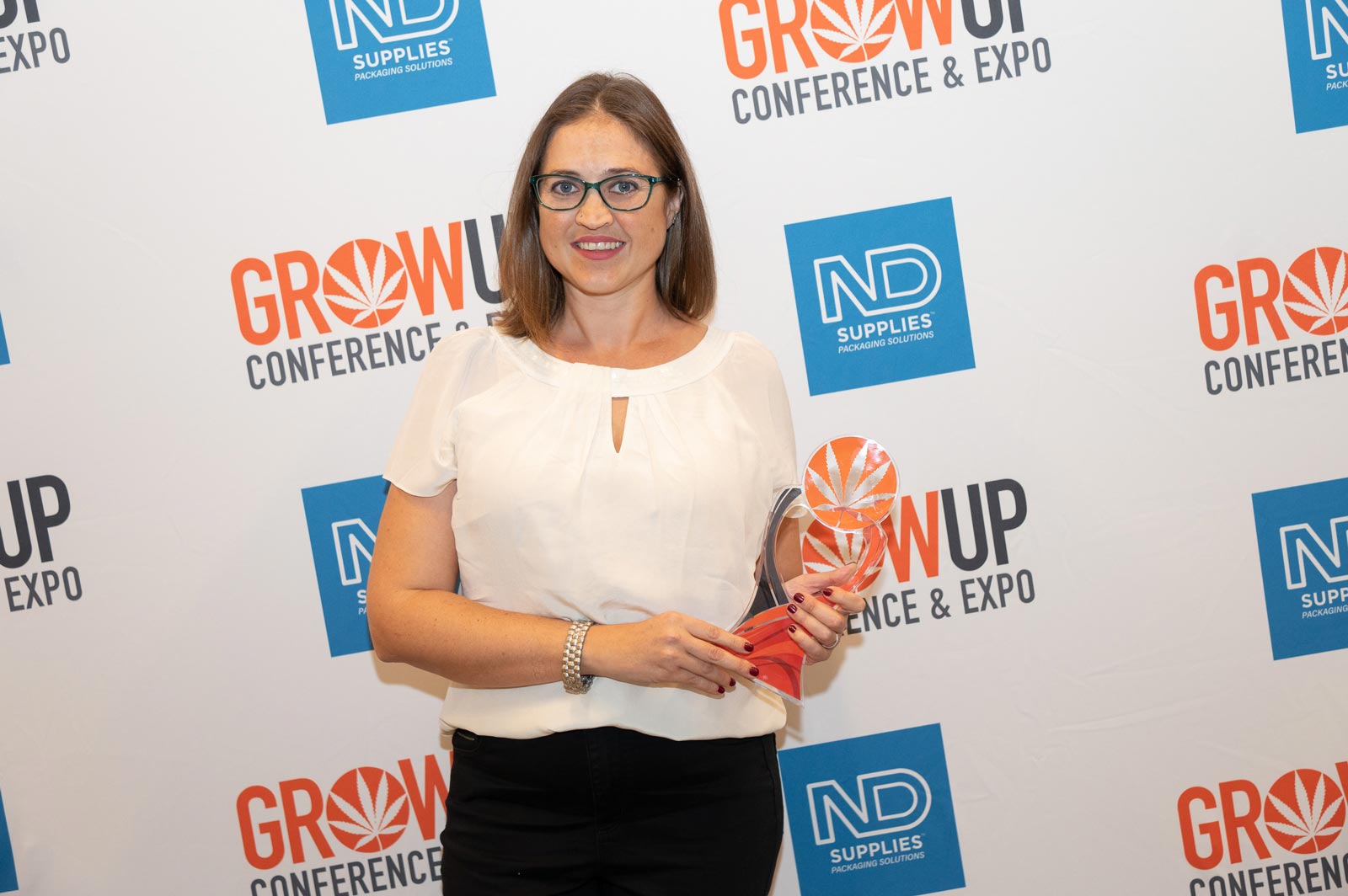 “What excites me about the work I do is not only making Canada known on the global market as a leader in commercial and medical cannabis standards, but to help propel Niagara as a craft cannabis destination,” Hollingworth said. “Niagara is already known nationally and internationally for is agricultural hub of excellence and innovation, now is the time to add cannabis to the list.”

Grow Up’s Cannabis Education Award recognizes the institution that has led the way in the education of a new crop of growers. Niagara College was one of nine educators nominated for the award.

Program coordinator Bill MacDonald is proud of what the CCP team has accomplished in just a few short years.

“Winning the Cannabis Cultivation Education award is extremely rewarding and recognizes the dedication and hard work the whole team put forth in the Commercial Cannabis Production program at Niagara College. Having a graduate of the program, Stacie Hollingworth, recognized by her peers as Master Grower of the Year really gives me a tremendous sense of pride for what we have and will accomplish at Niagara College.”

MacDonald won the Cultivation Education Award at the 2021 Grow Up Conference.

The Grow Up Awards were presented during the three-day Grow Up Conference and Expo at the Niagara Falls Convention Centre, September 11-13, and all current CCP program students were invited to participate in discussion panels and the science symposium.

“This is such a great way for the students to connect with industry professionals, learn from them and get a glimpse into the cannabis industry,” said Laurie Zuber, horticulture technologist with the College’s Commercial Cannabis Production program and a member of the conference’s advisory board. “Students learned so much from the speakers on the scientific panel and had the opportunity to make some really great connections.”

Launched in 2018 at the College’s Daniel J. Patterson Campus in Niagara-on-the Lake, the one-year post-graduate Commercial Cannabis Production program was the first of its kind in Canada. Students enrolled in the program are trained in the biological and cultural practices of cannabis production including plant nutrition, environment, lighting, climate control, pest control and cultivar selection.

As a graduate certificate program, applicants must possess a diploma or degree in the areas of horticulture, greenhouse technology, agricultural sciences, plant sciences, biology or a related discipline. Graduates can go on to work at Licensed Producers in a variety of roles in growing, operations, quality assurance, and more.

Since opening the doors to its state-of-the art, fully secure growing facility, NC has cultivated a total of 137 alumni from eight cohorts.